Learn About Sets With The Following Examples And Interactive Exercises 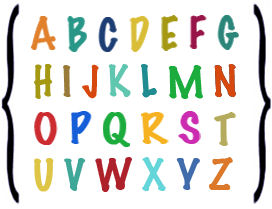 We learned how to write sets using roster notation, as shown in examples 1 and 2 below.

Example 1: Let R be the set of all vowels in the English alphabet. Describe this set using roster notation.

Example 2: Let S be the set of all letters in the English alphabet. Describe this set using roster notation.

In example 2, there are 26 elements in set S. It would be easier to use a shortcut to list this set:

Example 2: Let S be the set of all letters in the English alphabet. Describe this set using roster notation.

Example 3: Let T be the set of all whole numbers.

In example 3, we used an ellipsis at the end of the list to indicate that the set goes on forever. Set T is an infinite set.  An infinite set is a set with an infinite number of elements. It is not possible to explicitly list out all the elements of an infinite set. Let's look at some more examples of finite and infinite sets.

The ellipsis makes it easier to list both finite and infinite sets with roster notation. There are some sets that do not contain any elements at all, as shown below.

Summary: An ellipsis is a shortcut used when listing sets with roster notation. A finite set has a countable number of elements: An infinite has an infinite number of elements, such as the set of whole numbers, which goes on forever. We call a set with no elements the null or empty set.